Most Retirees Will Own an Online Business 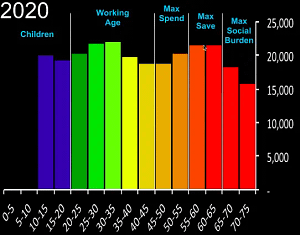 One of the best things about what I do is that I get to work with really interesting people doing positive things.

One of my favorite members is working in the retirement niche. I never spent much time thinking about that niche but it’s been a real education for me.

I thought the global economy faced some steep challenges. I thought the 100-trillion dollar debt bomb was a worry. But, man oh man, the storm brewing in the retirement world is just astounding.

In a nutshell, companies don’t need as many employees as they used to, it saves companies more money to get rid of older employees who are generally more expensive, life expectancy is rapidly increasing, health care costs grow faster than bamboo, and interest rates on savings are at historic lows.

That leaves people nearing retirement with a financial challenge that is unprecedented in human history.

The Guardian: Welcome to the New Dark Ages, Where Only the Wealthy Can Retire
https://www.theguardian.com/commentisfree/2017/feb/14/wealthy-retire-austerity-pensioners-work

Go Banking Rates: More Than Half of Americans Will Retire Broke
https://www.gobankingrates.com/retirement/half-americans-retire-broke/

Zero Hedge: The Baby Boom Tsunami That May Drown The Economy
http://www.zerohedge.com/news/2017-04-11/baby-boom-tsunami-may-drown-economy

Forbes: State Pension Funds: As Broke As Ever
https://www.forbes.com/sites/baldwin/2016/01/16/state-pension-funds-as-broke-as-ever/

It doesn’t take a lot of financial sophistication to understand the problem. The phrase ‘Five million is the one new million’ is making its way into the popular lexicon because it illustrates the issue in a sentence; folks need a lot more money than they used to in order to live beyond their employed years.

To those of us who already know this, the answer is fantastically obvious – operate an online business and live on cash flow instead of savings. That’s it. In one sentence. Problems solved.

For most of us, an online business that pays us just $5K to $10K per month solves every one of the retirement challenges. It even preserves the dream of living where the sun shines and doing more world travel. Both are easy with an online business.

If you are not easily scared, take a look at those articles I linked to. They paint a clear and comprehensive picture of the new retirement.

So it’s only a matter of time until hundreds of millions of people wake up to this reality.

Hey, somewhere there’s a retired firefighter, teacher or other government employee thinking “I don’t care if I live to 150, I’ve got a guaranteed pension with Cost of Living adjustments and super benefits.”

That person will have a terrifying awakening when he finds out there’s not enough in the fund to support anything close to what he was told, and the Millennials just won’t carry those folks on their backs anymore at the exclusion of their own prosperity.

So how does a Senior haul down $80,000 a year like clockwork for as many years as he or she is alive?

Well . . . they operate an online business. That just takes a sharp mind and a work ethic, not backbreaking labor, and winning a job interview competition against energetic 20-somethings waving a newly minted graduate degree and a willingness to work for a pittance.

Retirement. I never thought about it much, but I can see it’s going to drive a lot of people to the realization that an online business doing something that truly interests them is the best way to sleep better at night. Folks that age know the smart thing to do is to get some expert advice and to get started as soon as possible.

That’s how my new friend with a retirement website made me see we’re practically in the same business. All roads lead to the independence and freedom of owning and controlling your own source of portable income. In or out of retirement.

Here’s a way to quietly start.

Previous Post
Owning A Nano-Economy
Next Post
Can I Build an Online Business in My Spare Time?
PETE, I NEED YOUR HELP
CONNIE, I NEED SEO ADVICE