This is a psychological trap some people never escape. They look in the mirror and see a rational skeptic, but they are actually looking at a cynic.

And there’s a world of difference.

Here’s a quick example of this guy.

We occasionally run paid Facebook ad for our business. Connie often runs them for her social media clients. These are usually some form of a lead generation strategy that gives people something of value, such as a free video, an infographic, or a pdf download in exchange for joining an email list.

We’ve all seen hundreds of these little promotions and often they are a great way to find new blogs and new information about a subject we are genuinely interested in.

Every time we run these ads on Facebook it’s only a matter of time (not long) until somebody feels compelled to comment under the offer with something along the lines of, “This is a SCAM. They just want your email address!!!”

Of course, Connie and I are in a position to know with certainty that these are not scams or dishonest in any way. These are a straight value transaction of something useful and informative in exchange for permission to stay in contact via email.

But there’s something in human nature, or in our social conditioning that causes some people to live in substantial fear of being tricked by bad actors.

Got time for my greatest example? (Connie says I provide too many examples, but this one is incredible.)

In August of 1966 at the University of Texas in Austin, a man on an observation deck at the top of a 230 foot tower overlooking the campus began shooting people below. He caused the death of 18 people and injured 31 others.

Part of the reason so many people were shot from a single person using a basic rifle is that over the course of about 90 minutes that it took to stop him, oblivious students would exit the building and step directly into the killer’s view and his line of fire.

Of course, when they first came out of the building frantic bystanders who were hiding behind anything solid would yell to the exposed students to take cover. “There’s a shooter!” “Get behind this wall!” Etc.

For some, that’s how strong this conditioning can be.

Skepticism is a Virtue

Hey, if you’ve read this far you probably aren’t Guy #3.

It’s normal and natural to not take 100% of what we are told at face value. But a blanket reaction that amounts to “any talk of me finding ways to improve my life is just a scam” is a serious impediment to happiness.

True skepticism is what moved our species out of the caves.

Questioning, collecting data, measuring, then re-calibrating and repeating the whole process is the foundation of both personal and societal advancement.

The easily verified facts are, today’s technologies are enabling regular folks like us to create our own jobs and businesses online. Millions are already doing it. I believe hundreds of millions will be following in the next two decades.

Don’t allow cynicism or self-doubt prevent you from investigating the opportunities and finding a great place where you can fit in by doing something that is meaningful and enjoyable to you.

(If you are skeptical but open to evidence I think this will convince you.)

Previous Post
Don’t Be This Guy #2: “I have nothing to offer anyone”
Next Post
A Sneak Peek at the Near Future?
PETE, I NEED YOUR HELP
CONNIE, I NEED SEO ADVICE 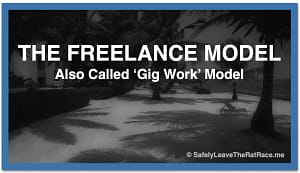